Deprecated function: The each() function is deprecated. This message will be suppressed on further calls in _menu_load_objects() (line 579 of /home/ra261/richadventure.com/includes/menu.inc).

In 2018 we spent almost a month living and travelling in the Yukon Wilderness aiming to recreate Alex Van Bibber's 1943 Canoil Expedition from Mayo to Norman Wells. During our stay in Betty's Cabin away from distractions of modern life with emails, calls and other elements I literally had 2-3 nights where I awoke with poetry and verse flying around my head. With a pencil and my journal this is what i managed to jot down by head torch. There are three poems about the Yukon that i am sharing on my website.

Of course I am not the first to experience such inspiration as the famous Yukon poet Robert Service bears witness to the creative and spiritual nature of this wilderness. During our time in the wilderness we randomly met up with E’speciale Skidoo crew featuring Pete Beatty (who spent 30 years living and trapping in the Yukon Wilderness), Ken, Kent, Mike and Ray. What followed was a 48 hour micro adventure up the line by skidoo to the incredible Woodpecker Point, Pete’s home.

Hopefully we have made friends for life, pioneering people with a beautiful spirit. The Yukon is full of such people…Enjoy.

Heading to the northlands for some Yukon magic

A change of plan sees us seeking a bolt hole

Experiencing the wilderness for a month is the new goal

Exploring and skiing with the cabin as a base

We’ve been here 3 weeks without another a human face

Then out of the bush appear five men

Startling us greatly in our little den

Our means of transition is my human toil

We’re out numbered so parley for a treaty

But we really didn’t need to worry

After beers and chats what’s the hurry

So it’s agreed then we all should stay

Eat ,drink and be merry and await the new day

Better still comes the offer come with us

Club e’speciale our name and you can join our crew

Skidoo tandem it’ll have to do

Kent’s out front riding on point

Sloughs on the left, right and some are joint

Woodpecker Point is a faraway place

Not on a skidoo boyo, they sure can race

Worse still it’s snowing and the weather is no good

Snows piling on the windshield and over the hood

We battle on chasing the light

Don’t fancy being stuck out all night

We try a few channels that seem pretty sound

Til a beaver dam or a log jam means turn around

And after a few wrong turns and a few major

He’ll be busted down to corporal I’ll wager

We arrive at paradise there on the bank

It’s our host Pete Beattie we’ve got to thank

These lessons are timeless and should be in school

The fact that they’re not seems pretty cruel

Hunting and trapping living off the land

Built these cabins in a month all by hand

You’d be amazed by the things that they’ve seen

Making a living from the pelt and the hairs

And ken is a man who knows his stuff

A library of knowledge, he ain’t so gruff

Mike is my pilot and a kindly soul

Flying over the snow like a young Luke skywalker

Open her up mike, un-cork her

We hit a few bumps and get big air

Rays the steady driver and a curious type

A travelling Wilbury away from the hype

Kent is the comic of this most excellent bunch

Worrying us all with his persistent hunch

This paradise and good company was all in a dream

A mirage he offers with a mischievous laugh

I know he’s Joking when all’s said and done

Just knowing these guys the worlds full of fun

We needn’t have worried, with an awakening feeling

Of laughter and friendship full to the ceiling

And hopefully one day a reunion gig

With the band back together for another fine jig 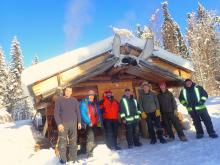