Adventure: The Ski to the Edge Project

Home > Blogs > richadmin's blog > The Spell of the Yukon is Alive

The Spell of the Yukon is Alive

The "Spell of the Yukon Is Alive"

In 2018 we spent almost a month living and traveling in the Yukon Wilderness aiming to recreate Alex Van Bibber's 1943 Canoil Expedition from Mayo to Norman Wells. During our stay in Betty's Cabin away from distractions of modern life with emails, calls and other elements I literally had 2-3 nights where i awoke with poetry and verse flying around my head. With a pencil and my journal this is what i managed to jot down by headtorch. There are three poems about the Yukon that i am publishing on my website.

Of course i am not the first to experience such inspiration as the famous Yukon poet Robert Service bears witness to the creative and spiritual nature of this wilderness. One of his poems is called "The Spell of the Yukon". Hope you like it...

The spell of the Yukon is alive for all to see

With its echoing silence that has truly captured me

This wilderness is one of a kind

Vast vistas and breathtaking views that blow the mind

How would you find words to describe this magical place

A second home , a spiritual bolt hole or a glint on your face

Of a time when folks staked their lives on a claim

Canoeing the river, rapids galore anything but tame

Just getting to Dawson was incredible toil

So why risk it all for a faraway land

Gold folks but now it deals a different hand

The best starry nights that I’ve ever seen

The aurora borealis doing its thing

Like mum and dad dancing or a highland fling

I’d never seen animals like these except in a zoo

For the price of a plane ride you can too

A sour dough until a freeze and a thaw

But be warned as I’ve shared with you the key

It’s an addiction, a habit , a bucket list place

Cos the people who live here sparkle and shine

Making a living at the end of the line

The more I witness here the bigger my goal

To embrace the spell and nurture my soul 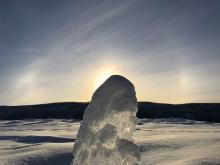