Adventure: The Ski to the Edge Project

The Ski to the Edge Team (Rich, Si and Matt) have spent almost a month living, exploring and traveling in the Yukon Wilderness on the Stewart River near Mayo. The original plans to follow Alex Van Bibber’s 1943 Canoil Expedition took a few twists and turns as events unfolded.

As the team departed Mayo temperatures plummeted to minus 50 ambient and to minus 70 with wind chill on the frozen river. The plan to follow Alex’s 560 route North to Norman Wells through the Mackenzie Range required the team to travel unsupported carrying all equipment and food in their pulks and Osprey day sacks. The combined weight each team member was man hauling was just over 70kgs.

Early daily mileage with conditions and adapting to the pulk weight ranged from 10 to 20 miles with equipment and humans alike at their operational limit in the hostile cold. Reaching Fraser Falls (which was frozen) the team took refuge in a local cabin with Matt Harpham experiencing numb toes. This deteriorated further with blisters and the onset of frostbite on both feet. It became clear that Matt continuing was not an option and an extraction plan was activated. Carmen, our local friend in Whitehorse organized Steve Reid, a fellow Brit and avalanche technician living in Whitehorse to evacuate Matt by Skidoo which happen several days later.

Rich and Si decided to press on after the extraction heading further along the river exploring the route and wilderness.  The original plan to make Norman Wells, under human power did not seem achievable nor safe with just two breaking trail with the schedule and time available. Rich also was having problems with his right ankle and foot with flared ligaments causing significant pain and swelling.

They followed the portage route around Fraser Falls and on past No Gold settlement covering 13-14 miles a day across deeper snow and patches of jumble ice. About 65 miles outside of Mayo they located a local hunting and trapping cabin belonging to Betty and used this as a base for exploring some of the local landscape, sloughs and features.  Highlights included huge 4m icicles, hill top views and other locations.  They observed plenty of moose, lynx and wolf tracks following their trails and even watched a wolverine scavenging. There were also lots of nights with incredible starry nights and also the Northern Lights (Aurora Borealis).

After 3 weeks without any outside human contact they met up with Pete Beattie and his E’speciale crew of Skidoo travelers coming through the trees. It was a surreal moment and sparked a new series of adventures by skidoo over a couple of days.  Pete, Mike, Kent, Ken and Ray has a lifetime experience exploring the Yukon Wilderness hunting and trapping. Pete had spent 30 years living at Woodpecker Point, 60 miles further along the trail, hunting and trapping. A new plan was hatched where Si and Rich would accompany the group to Woodpecker riding on their skidoos.

Getting to Woodpecker even with Skidoos proved quite a challenge with significant jumble ice, log jams and beaver dams on the sloughs and even open water traces. Conditions were poor with strong winds and heavy snow but eventually after a full day travel the team made Woodpecker Cabins. It was a real wilderness paradise and an incredible place to spent 24 hours sharing tales of past exploits. Pete’s neighbours at Lansing Bruce and Beth (miles upstream) had also provided great local knowledge to the team before departure from Mayo.

The following day the skidoo team had to hit the trail again to return to Mayo. Fortunately the day although windy brought blue skies and clear visibility.  Si and Rich were returned to Betty’s Cabin and the ‘mirage’ of people and company departed. There was then the small matter of a 65 mile ski back to Mayo which also had a real sting in the tail. Our plans to try and hit big miles was impeded by two days of heavy snow and also a day of strong headwinds. Despite this with lighter pulks , minus our months rations, we managed two 20 mile days.

Rich Harpham commented “ As a team we were gutted to lose Matt early on to the onset of frostbite but clearly his safety and well-being was our primary objective. The original goal of reaching Norman Wells and beyond then seemed beyond the levels of acceptable risk in temperatures and conditions down to minus 70 below. After 4 years of planning and training we are disappointed not to complete the entire journey but remain proud of covering over 150 miles on foot with heavy loads. We also remain committed to raising money for the Duke of Edinburgh Award Scheme and also for the Alex Van Bibber Fund for helping young people learn outdoor and traditional skills.  I would also add that we often learn more from our mis-adventures and ‘curve ball events’ than we do from our simply completing our goals. Certainly the Ski to the Edge expedition pushed us and our equipment to its limits and the edge!”

Simon Reed, Former Royal Marine added: “ We want to say a huge thank you to all the local people who made us feel so welcome in Whitehorse and particularly Mayo. We were sad to leave Mayo and feel we have made friends for life. Certainly we got a great insight and experience of the hardship and challenges that Alex and his team experienced in 1943. It will remain a tough expedition by tough people with incredible skills. We would like to add a huge thanks to Carmen Gustafson, our friend from Whitehorse who helped with lots of local logistics and support”.

The last words on the Ski to the Edge Challenge have been left to Sir Ranulph Fiennes who endorsed our expedition and supported it from the beginning:

“But, by the end of four dark days, we had logged eleven northerly miles. This would not sound very impressive except to someone who has pulled a load in excess of his own body weight over rubbles in the dark and at a temperature of -40 below.” Sir Ran Fiennes (World’s Greatest Living Explorer , Guinness Book of Records)

In the next few days, weeks and beyond we aim to share some of the incredible images, video and reflections from the Ski to the Edge Trip.

Thanks to our sponsors to providing the best kit in the world for our exped .

Thanks for supporting us

The Ski to the Edge team are raising money for the Duke of Edinburgh (D of E) Award Scheme and the Alex Van Bibber Memorial Fund to raise funds to help young people develop life and outdoor skills. Closer to home Rich and the Canoe Trail team are an are approved activity provider for the D of E helping young people develop their adventurous side.

Flint Group and Bamboo Clothing have been significant friends to the Expedition providing funding and support to move things forward. We have also had help from Canoe Trail, Canadian Affair, Air North and North Wright Airways who have assisted our travel and logistics and Yukon Tourism. Not forgetting Up North Adventures and Mark, their founder and owner who introduced us to Alex and his story.

Rich’s wider adventures are supported by:

You can follow his adventures through social media & @ www.richadventure.com 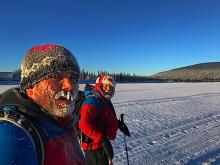