Sea kayaking to the Isles of Scilly

Driving down to Lands End proved to be something of a magical mystery tour. As with the running theme of many of our challenges it coincided with some of the worst weather on record. We arrived at Lands End and did the touristy bits, the visitor centre, Sennan Cove and other Cornish Treasures.  The storms had brought massive waves with 2-3 metre breakers and surf.  The locals had even moved the lifeboat to the South Coast so we were facing another difficult risk assessment.

Paddling out through the monstrous surf before a 10 hour endurance effort was foolhardy so we decided to find a location on the Southern, more protected coastline. We tuned in to the locals as the best source of advice and discovered Lamorna Cove which added another 4-5 miles of paddling but avoided the surf break.  We had organized for a  local fisherman to provide some support cover given the conditions. We followed him and wandering sea gulls into the Atlantic.

Given the low lying elevation of the Isles of Scilly the horizon offered no clue of our destination which was disconcerting.  The 4 metre swell had a slow rolling pitch which made us all feel queasy. Bamboo Dave began to really suffer and after a couple of hours threw up. 30 minutes later the process repeated and 45 minutes after that. He remained green gilled and sick for the next 3-4 hours before exhausted he was unable to continue. One of the highlights of the long crossing was a fly by from a Royal Navy Sea King helicopter. We also got a few toots from the Silloian Ferry which also proved a good motivator. Our destination was hosting the World Gig Racing (Rowing festival) so our arrival would be given a good reception we hoped. We had certainly made an effort.

Eventually the horizon offered a change of landscape and we realized it was ‘Land Ahoy’. On closer inspection as we approached the large vessel moored between the islands we discovered it was a Royal Navy frigate. They would be pleased to see us and celebrate our success. Apparently they are not keen on receiving a group of kayaks on their bow and politely asked us to leave at gunpoint. 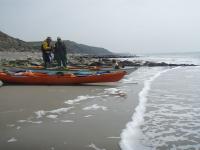 We paddled across the bay and into the town. Surely fanfares and some kind words followed by beer and food. Alas it was not the case we were informed that all the food and drink had gone and we should have arrived earlier.  The cheek! We did protest and explain we had been trying to get their sooner.

We spent a few days sea kayaking around the Isles of Scilly in testing conditions surrounded by stunning beaches, islands and wildlife. It was definitely a place we will return to in future with lots of unfinished paddling.  The duration of the crossing had proved tough with balancing hydration, feeding our bodies and maintaining energy and of course needing the toilet.  Trying to force ourselves to pee in our boats proved pretty difficult. We had paddled from Lands End and found the paradise that is the Isles of Scilly.  4 challenges complete with the big one, The Inside Passage, Vancouver to Alaska left to tick off.

High Points: Getting a Royal Navy flyby by a Sea King Helicopter

Low Points: 9 and ½ hours in a sea kayak  and trying to pee in our boats